Up, up, and Beyond 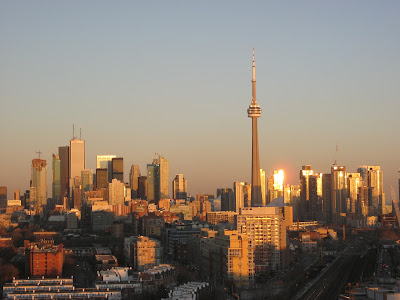 Here's the view out our living room windows from earlier this evening. Thought you would like the sunset view on the Toronto skyline.

That very iconic skyline is the theme of this posting. New data reveals Toronto is building more high-rises than anywhere else in North America.

There are currently 132 high-rise buildings (meaning 12 to 40 floors) under construction in Toronto. For a sense of context, Mexico City ranks second with 88, New York City is third with 86, Chicago is fifth with 17, while Miami rounds out the top five with 16 high-rises in progress. Overall, Toronto has the second-highest number of completed high-rises and skyscrapers in North America, with 1,875.

Fueling the frantic building is a record year of Toronto condo sales of $10-billion. Soon to join the list is a just-announced 75-storey condo called 10 York which will, ahem, trump the soon-to-be-completed 60-storey Trump International Hotel & Tower. Trump has been proudly marketing itself as Canada's tallest residential tower, a title it may only enjoy for a couple of years.

The thousands of new residents will eventually get around downtown in a fleet of new TTC streetcars and new "Rocket" subway trains.