Geeks, Wine, and a Reunion 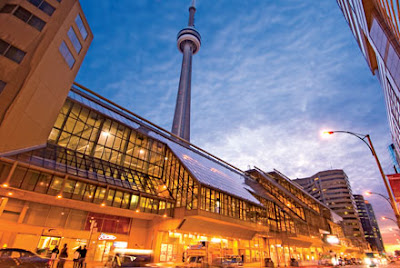 This past weekend began with a wonderful reunion with two of our dearest friends from Kingston, Karen & Jen.

They arrived just before noon and, after a tour of our apartment, we set out into Liberty Village in search of brunch. My original plan was to take them to School but it was so packed that we decided to move on and we ended up at Liberty Bistro, an utterly charming, relaxed, and peaceful oasis. The food was great and the service even better!

After stuffing our tummies, we toured the girls around Liberty Village, making sure we hit favourite spots such as For the Love of Cake (for some yummy cupcakes), urban furniture store casalife, and the always fun decor store West Elm.

We then strolled over to West Queen West to take in Toronto's hippest hood, checking out places like the Drake General Store (the best little gift shop ever), BYOB (a one-of-a-kind cocktail emporium), and a pop-up shop operated by the Clothing Brand Experiment.  We finished the evening off with a fantastic dinner at Terroni before saying our goodbyes.

We began Sunday with brunch at Marben, which has quickly become a favourite of ours. Then we were off to the Metro Toronto Convention Centre to first embrace our inner geek hood at Toronto Comicon. This was a collector's paradise, with about 80 vendors selling their various wares. There were certainly every stereotype present, from the Kevin Smith lookalikes, to the anime costumed girls, to the pierced goth group. Overall, very good fun. I got excited when I stumbled across a Bloom County compendium, and Mark purchased a two-volume collection of  an Astonishing X-Men series written by our hero Joss Whedon.

Then we strolled over to the south building at the MTCC to take in the Food and Wine Expo.  I was in heaven, strolling around all of the various wine vendors. I took in a few tastings as well, notably a 21 year-old Balvenie Portwood single malt scotch, and a Cab Sauv from the Diamond Collection of Francis Ford Coppola.