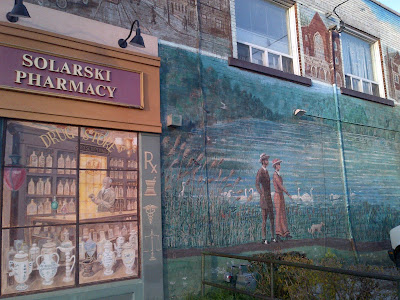 I took this picture earlier today as we strolled through Roncesvalles Village, Toronto's Polish enclave. Just last month The New York Times described the eponymous main street as being filled with "indie bookstores, quirky coffeehouses and smart boutiques [that] feel more like small-town hangouts...with a blessed absence of the chain stores that have crept across Toronto".

Our day began with brunch at School in Liberty Village, and then we walked westward along Queen Street West into Parkdale Village, which has become a great source for funky vintage clothing stores and antique shops. We discovered a great vintage shop called Philistine, in which I found and purchased a beautiful Brooks Brothers Polo Button-Down shirt. This was a real find as it is was actually made in the USA, a rarity these days in the clothing retail industry.

The other fantastic vintage shop we found is called Studio 1686. The store is run by sisters Marya and Irene, who both worked in wardrobe in the film industry for 20 years. The clothing in the store was worn by stars. They cull all the cast-off clothing from various film productions. I tried on two beautiful shirts but did not take any home.

We kept walking west on Queen Street and were soon in Roncesvalles, and enjoyed the recently revitalized main street (Downtown Kingston BIA please take note), with its delis, cafes, bakeries, used book stores, and unique shops. We decided to have an early dinner, opting for authentic Polish cuisine at Bistro La La.  We each had a pint of Tyskie beer, and Mark opted for dumplings with goulash whereas I started with a delicious borscht, followed by a massive schnitzel. Tummies stuffed, we walked home to end our wonderful day of exploring.
Posted by Unknown at 10:23 p.m.