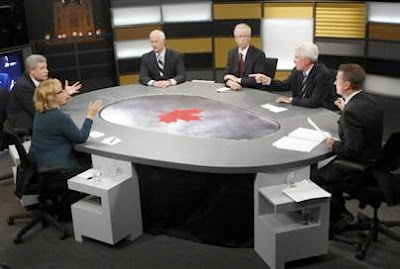 Elizabeth May must feel even worse than the proverbial spindly geek always chosen last for sports teams. Poor Ms. May is not even allowed to play with all of the big kids as they ready themselves to shout...er...talk over each other...er...debate in mid April. The Green Party leader is now complaining to all who will listen, a move that, unfortunately, makes her look whiny.

I miss the real federal election television debates of the 1980s. Who will ever forget the Turner/Mulroney debate of 1984, during which Mulroney eviscerated Turner with a devastating retort on patronage: "You had an option sir to say 'no' and you chose to say 'yes' to the old attitudes and the old stories of the Liberal party," Mulroney argues. "That sir, if I may say respectfully, that is not good enough for Canadians." It was Mulroney's election after that moment. I am no Tory but at least it was an intelligent and well-structured debate.

The tv debates of the past number of years have been embarassing and frequently ridiculous. Poor moderation has enabled the party leaders to shout talking points at one another. In the "debate" pictured above the leaders sat around a table; a format that worked for none of them to the distress of participants and viewers alike. If we continue to lower the standards of public debate how can we expect our party leaders to perform admirably? Indeed, Ms. May might want to consider herself lucky she has not been invited.

Meanwhile, the Harper campaign has upped its dreadful attack ads. The most recent one hammers the viewer with the premise that the Liberal party leader is merely an opportunistic glory whore and ends with the ominous warning "A vote for the Liberals is a vote for Ignatieff". Frankly, I have never met a politician who wasn't part glory whore, so I am not sure why this is supposed to frighten the electorate.

The c-word has also been dropped, considering Harper himself once conceded in the past that it might be necessary. Besides, he may even need it in the future.

We learn that some notable folks are leaving the NDP to endorse the Liberals; a sensible strategy if one is hoping to help form a new governing party. No one but the wilfully ignorant doesn't understand that this election boils down to Mr. Harper vs. Mr. Ignatieff. Layton and Day, both lovely people and good citizens, are merely bystanders yelling into the wind.
Posted by Unknown at 6:59 p.m. No comments:

If I worked at Sterling Cooper 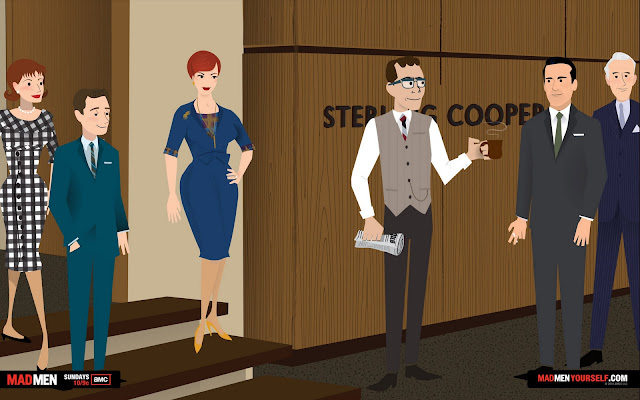 The Mad Men website has a cute app called "Mad Men Yourself" where you can build yourself as a character. So here is the TV version of Stacy, arriving for work at Sterling Cooper...
Posted by Unknown at 11:10 p.m. No comments:

The wind will blow 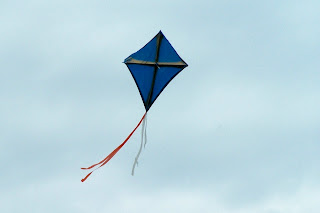 
Bono wrote "Kite" as his father, Bob Hewson, was dying of cancer.  The song laments having to say goodbye to someone you are not ready to lose. I have always  been touched by this song but in light of the recent death of my father the song has taken on a much greater poignancy and meaning. Of "Kite" Bono said, "I wrote this for my kids, but now I think my old man wrote it for me."


I've been thinking of my dad quite a lot in these last few days, now that the tornado of being back in Aylmer has ebbed. These little memories come at me, pushing out of me like a bird hatching. And  there is nothing to do to stop them. I am blessed to have a copy of the last picture taken of me and dad. I have it in my dining room. The picture was taken on the front porch of the family house in Aylmer, in August 2010. It hurts too much to look at it, though.


I was not prepared for how much I am going to miss him. We were not especially close as I was growing up, he being on the road all the time. Then I moved away, in 1989, to attend Queen's and was back at home infrequently myself. But in these past few years, dad opened up to me and we started really communicating. He was also always welcoming of Mark and he seemed to enjoy our company when we visited.


Dad's great fear was to die alone and I am so honoured that we were both there holding dad as he passed, as was my sister Angela, and my mom. In the hospital room was also my dad's brother Glenn, his son Cullen, and my dad's cousin Micheal (who had lost his dad just a few days earlier). Dad was surrounded by love and I shall always be so grateful for the opportunity to be with him and to let him know that he was dearly loved. It was my sister Angela who gave dad permission to go, to stop fighting, and to rest. In an instant he was gone. It was so peaceful and it is Grace that spared dad.


I miss him. I am glad I got to spend so much time with him and to tell him what I needed to tell him.

[transcript of my eulogy for my father]

I remember clearly the first time I called my father “Dad”.  I don’t remember what day it was, our how old I was, but I do remember the where and how. My mom and I had been living in that lovely cedar-siding home in Breckenridge for some time and one day mom asked me to go get dad, who was in the basement. So I ran over to the top of the stairs and I paused. Until that moment I had always called him “Richard”. I thought about it, and with heart beating, I called out “dad’? I don’t know if it surprised dad or what he thought but he came when he heard me. It was a watershed moment for me. A few years later dad would formally adopt me.  I was in Grade 7 and my parents took me out of class so we could go to a lawyer’s office to make it official. When I returned to class my teacher announced that instead of “Stacy Hodgins” I was now “Stacy Kelly”. One of my classmates immediately yelled out, “Did you get married?”
Dad was a man of few words. He was more a man of action and deeds. One of the blessings of these past few days has been the opportunity to hear so many wonderful stories about dad. We have come to appreciate through many of your stories how dad’s actions and deeds affected you and made a difference in your lives. Dad was someone who you could depend on in your time of need; someone who was there for you and would selfishly help out family and friends.
The words dad did use were often in the service of a good yarn. For dad, a tease or a prank was a sure sign of his affection. I remember being in the car with dad and most likely either reading or daydreaming and looking down to find dad’s false teeth sitting on my left leg. That was dad. He loved to tell a joke or a story about his past pranks. We heard many great stories from dad, usually involving some poor unsuspecting friend or coworker. Perhaps we should not be all that surprised that he  was such a great storyteller: stories are central to the Ojibway and Irish cultures that form dad’s heritage. Whatever the reason we always knew a good story was coming when we saw what mom calls “the gleam” in his eyes. Dad’s chrystalline blue eyes shone as bright as the morning sky.
For us children memories of dad typically revolve around two key places: cars and Lake Kipawa. Each of us (and sometimes all of us) spent hours with dad on the road headed somewhere north. When we were younger trips began in the Ottawa Valley, to places like Maniwaki, Renfrew, and then further afield to Val D’Or and Rouyn-Noranda. We were schooled in traditional Country music. The soundtrack of our childhood featured George Jones, Conway Twitty, Willie Nelson, Hank Williams, Kenny Rogers, and Johny Cash. To this day it’s impossible to hear one of their songs and not think of dad; of hours in the back seat, reading, playing games, singing, fighting, and waiting for the next rest stop. All the while dad would somehow navigate for hundreds of miles with just his left thumb on the steering wheel.
For most people cars are a way to get around. For our family cars were a way of life. I distinctly recall hanging out with dad when he worked at Eliott’s in the early 1980s. At the end of the day the fraternity of car salesmen from the lots along Richmond Road would hang out at Napoli's near the corner of Island Park Drive.  Dad would give me a pocketful of quarters so I could play PacMan and the guys would all trade stories. The guys were colourful characters and they all seemed to be larger than life. Dad’s car lot was truly a family business. All three of us kids ended up working for dad. I cleaned cars at dad’s lot in Ottawa, and Marsha and Angela eventually started selling cars at his lot in Aylmer. Dad’s brother Glenn sold cars, and our mom worked there as well, as the bookkeeper, keeping everything in order. Both my sisters also ended up driving cars back and forth from up north for dad; and I have learned that quite a few people here today were recruited by dad to be drivers.
More than anything dad was happiest in a boat on the waters of Lake Kipawa. Our family began its annual trips to Kipawa in August 1980, the summer Angela was born. So, naturally, when Angela’s son Kaelan arrived in August 2001 he was bundled up and was motoring on the boat with his granddad a mere two weeks later. Like his mother, Kaelan has inherited dad’s love of fishing and camping in the great outdoors, and Kipawa has a very special place in Kaelan’s heart. It was dad’s joy to have as many people as possible join him in Kipawa, and we know that our dear cousins Chad, Liam, Jonathan, Megan, Cullen, and Neil have many fond memories of summers on that beautiful lake. Of course, agreeing to go to Kipawa meant seeing dad early in the morning fishing in his underwear, a practice Kaelan also picked up. I think we all agree that being on the water was dad at his happiest and most at ease. We were so touched that dad was able to make a special trip to Kipawa with his brothers Bobby and Glenn, his cousin Donny, and his uncle Grant where they journeyed up to Hunter’s Point, an ancestral landmark.

As we mourn our dad we know that you are also equally mourning…a brother, a cousin, a nephew, a colleague, a friend. Please accept our sincere condolences on your loss. We share your grief and are grateful for your kind words and especially your stories of dad.
God bless you Dad. We love you and we miss you. We promise to honour your memory in our actions and deeds.