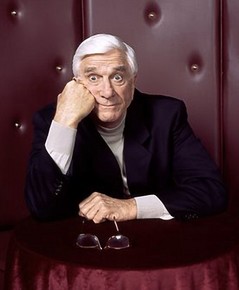 Canada has exported an incredible roster of comedic actors to Hollywood. One of the earliest was Leslie Nielson (Feb 11, 1926-Nov 28, 2010), who began his film career in 1956. Leslie actually began his career as a dramatic actor on television. In 1950 alone he appeared in over 50 live dramatic shows. Viewers of his generation will remember Nielson for his roles in  Forbidden Planet (1956) --a forerunner to Star Trek-- and The Swamp Fox (1959-1961).

Nielson's career renaissance came after he was cast in Airplane! (1980), in a supporting role as Dr. Rumack. Flawlessly delivering his comedic lines, Nielson emerged as the go-to guy for deadpan one-liners. He was central to the success of The Naked Gun franchise as the hapless Detective Frank Drebin. He also appeared in the third and fourth instalments of the spoof franchise Scary Movie.

Airplane! is my all-time favourite comedy and it never fails to make me giggle like a little kid. Some of Nielson's best moments are captured in this online tribute. RIP Mr. Nielson.

Behind every pop star... 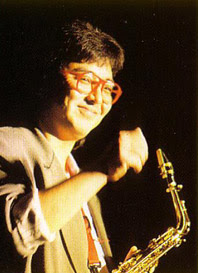 Recently, I was at a cocktail party hosted by some friends and I was introduced to a lovely man named Ian "Koko" Kojima. An unassuming fellow, he was quiet-spoken, warm, and very friendly. He spoke little of himself, except to say that he had retired to Kingston. It was his wife who proudly dropped the bombshell: Kojima had played in Chris de Burgh's band. As in "Lady in Red". Cool!

Modest as ever we had to pretty much had to drag stuff out of Kojima. Turns out he was Chris de Burgh's bandleader from 1979 - 1994, and he played the saxophone and keyboards.  He is what is known in the music business as a session player, and he has an impressive track record.

In the early 1970s he was in the band Great White Cane, which featured singer Rick James (who went on to stardom with 1981's "Super Freak").

In the 1990s Kojima went on tour with none other than David Hasselhoff. You can catch him in The Hoff's 1990 live DVD "Live and Forever".

These days Kojima tours around the province playing music. He put together a blues band of great local talent called KokoVann. He seems to be enjoying his "retirement" and I have to say I can't recall meeting a nicer person in years.
Posted by Unknown at 1:41 a.m. No comments:

Weeping for the future 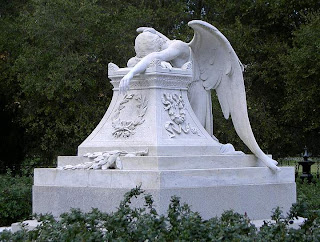 I came across a blog written by a middle school (ages 11 - 14) English teacher, who shares things he is asked and overhears at his school.

It's hilarious and saddening at the same time. Kids sure do say the darndest things...
Posted by Unknown at 3:09 p.m. No comments: