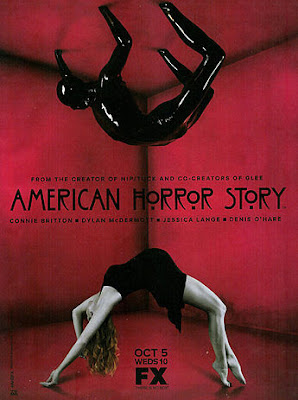 Being the horror genre fan he is, Mark has fallen for FX's chilling new show "American Horror Story". Of course, that means I have been watching it every Wednesday night alongside him.

It's a downright creepy show, with some genuinely scary elements. The series revolves around the Harmons, a family of three who moved from Boston to Los Angeles as a means to reconcile past anguish. Alas, their new home is the source of far deeper and demented problems than they could have ever imagined.

The cast is anchored around Dylan McDermott ("The Practice") as a psychiatrist; Connie Britton ("Friday Night Lights"), who plays his wife, and newcomer Taissa Farmiga as their teenage daughter.

However, it's the supporting cast that is actually worth watching. The legendary Jessica Lange ("The Postman Always Rings Twice") plays the Harmon’s neighbor, chewing every scene like only few can. Evan Peters ("One Tree Hill") is memorable as a psychiatric patient and the remarkable Frances Conroy ("Six Feet Under") is the Harmon’s excessively devoted housekeeper. And then there's that guy in the rubber suit...
Posted by Unknown at 10:42 p.m.