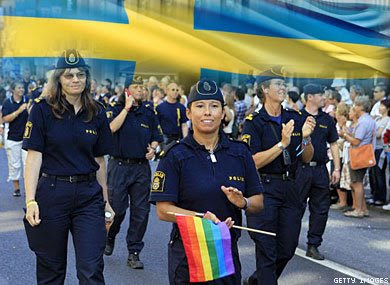 "Sweden became the seventh country in the world to legalize same-sex marriage nationwide after a six-hour debate on Wednesday among parliament members.

Gender-neutral marriage licenses will begin to be issued starting May 1, replacing a civil union option that has been offered since 1995. Religious institutions will not be compelled to perform ceremonies for gay and lesbian couples. A majority of bishops in the Church of Sweden said that churches should not be allowed the task of handling legal registrations of marriages."