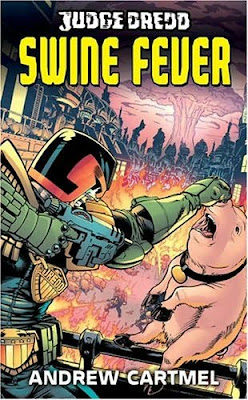 UPDATE: On Thursday, the WHO announced it would no longer use the term "swine flu" as pigs are now being slaughtered and pork products are being banned.
The news media outlets are in full alarm mode regarding the Influenza H1N1 virus, coined as the "Swine Flu". As of this morning there are 112 confirmed H1N1 cases worldwide, with 8 confirmed deaths (although the virus is suspected in 100+ deaths in Mexico).
I don't want to be misconstrued or appear trite. I take seriously any and all public health concerns. But even CNN is reporting--in a rare bout of perspective--that on average some 36,000 people die every year in the U.S. due to seasonal flu.  That's 3,000 seasonal flu deaths a month. Thus, we should always excerise diligence in our preventative actions such as hand-washing, food-handling, and proper dietary consumption.
So, the obvious question is why are the various media networks  spreading such fear and panic about swine flu when we already have much more evident clear and present dangers such as the so-called regular flu and the fact that child obesity rates in the U.S. have tripled since 1980. And don't get me started on annual traffic fatalities...
Posted by Unknown at 10:13 a.m.