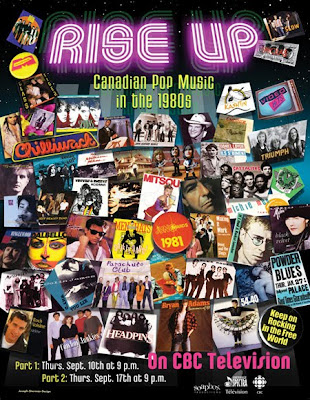 By complete accident, I caught a great documentary on CBC called "Rise Up: Canadian Pop Music in the 1980s". What a wonderful trip down nostalgia lane!

The early 80s saw the origin of music video television, first in the US with MTV and then here in Canada with MuchMusic. But since there were so few music videos, Canadian acts who managed to produce videos ended up getting copious amounts of playtime on both sides of the border. I am sure many folks assumed many of the pop hits of the decade were American or European bands as a result.

The documentary shows how MuchMusic really broke new music outside of album-oriented classic rock that had dominated the radio stations. The Vee-Jay was born (I had a massive crush on Erica Ehm) and the MuchMusic open studio, wobbly camera style became a signature style. The other thing the doc effectively illustrates is how incredibly influential Toronto's Queen St West was on the Canadian pop music scene.

Although not quite chronologically ordered, the documentary plays like a checklist of essential Canadian 1980's pop hits.  And it's an impressive list indeed. Bands such as Chilliwack, Glass Tiger,  Red Rider, The Pursuit of Happiness, Slow, 54-40, Blue Rodeo, Parachute Club, Triumph, Cowboy Junkies, Men Without Hats, The Box, and The Grapes of Wrath.