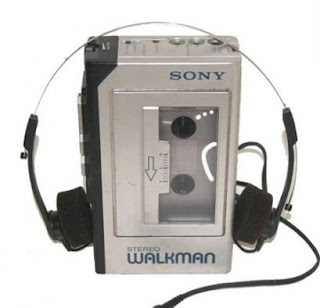 Sony announced recently that the last batch of its iconic Walkman was produced in April of this year, and that no more new cassette Walkman products will be made.

The Sony Walkman debuted in 1979, and reached its peak as the must-have accessory for pop music fans for those of us who were in high school from, ahem, 1984 to 1988.

While younger folks may scoff as such antique, even quaint, technology it's worth pausing to reflect on how much the Walkman changed the relationship of music to the listener. As the first truly portable music device, the Walkman blazed the trail for personal listening and created a market for a more individualistic music experience.

There is no doubt that the Walkman was a revolutionary consumer product, paving the way for the portable CD and DAT devices and, eventually, the digital evolution to MP3 and the now ubiquitous iPod and its various spawn.

The Walkman was every much the status symbol that the iPod is today. There were clones on the market then --as there remains today--and you could walk proud only if you had a genuine Sony Walkman. In fact, I recall that the de riguer outfit was either a Lacoste polo shirt, Ralph Lauren Oxford button down, tan or brown cords, and your Sony Walkman. Some of you may recall the Lacoste knock-offs, those scratchy polo shirts with the fox sewn on their fronts, that you could buy at Sears? But I digress...

So a little tear for getting a Walkman model with auto-playback; for running out to Sam the Record Man to get the latest INXS, U2, or The Cure cassette; for having a little place to carve out in your head while you rode the bus to and from school; to the first time you could really make a statement with your music; to forging your first scaffolding of what would become your sense of self and identity.
Posted by Unknown at 1:41 a.m.