On the restaurant trail 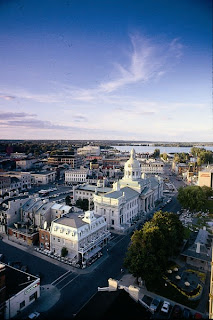 As the dust finally settles on downtown Kingston's "Big Dig", the rather clever marketing campaign created around the revitalization of the main corner of historic downtown, some interesting developments are about to occur in our restaurant scene

First off, we may have a burger war on our hands. Last week Harper's Burger Bar opened just near the busy corner of Wellington and Princess streets. We tried to go in on Thursday night but the place was absolutely packed. They are getting the jump on Five Guys Burgers and Fries, opening up a block north. Whereas Harper's is the brainchild of the folks behind local favs Chien Noir and Atomica, Five Guys is the famous burger joint that started in the D.C. area. To add some more competition, a local joint opened up not too long ago called "Vinny's Italian Sandwiches". After a very brief run it closed (confusing all concerned) and then reopened as "Vinny's Burgers and Fries".  It will be a hoot to see which will thrive in Kingston's competitive restaurant market.

Secondly, there may be a tea war brewing as well considering a David's Tea location is opening up on one of the downtown's best blocks, just a few storefronts down from the current Tea Store. Don't know who this David person is but he's got the best location, right next to our Empire Theatre (movies) and across the street from the Grand Theatre (music & plays).

Clogging up the streets will be a poutine war, with a few new upstarts trying to unseat Bubba's as Kingston's fav poutine destination. A local operation called "Poutine Place" is opening up soon, along with a branch of the Smoke's Poutinerie empire.
Posted by Unknown at 4:38 p.m.