When he walks down the street... 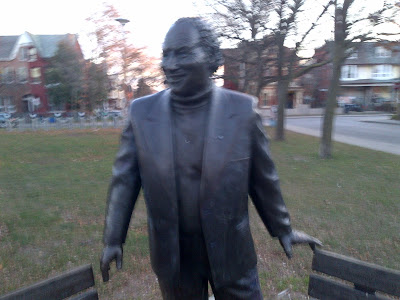 I snapped this rather blurry photo of the statue of Al Waxman yesterday afternoon as we strolled around Kensington Market.

That show was a favourite of mine of that era, rivalled only by "Beachcombers" as must-see TV back in the days before cable, VCR, DVD, and Netflix. To me, growing up in the Outauoais region of Quebec, the Market--its characters and setting-- was Toronto. When I finally was able to travel to Toronto in my 20s, I made sure I went specifically to see where Larry King had lived.

Looking back, I have to praise CBC for having aired a show with such diverse characters, of various religious and ethnic backgrounds. At first heavily popuated by Eastern European Jews, the 1950s brought in waves of Portoguese, East Asian, and Caribbean peoples. Today, Kensington Market has somehow managed to maintain its disctinctive counterculture, anti-corporate vibe, with dozens and dozens of independent vinatge stores, markets, cafes, and food suppliers.

After an amazing brunch with lovely friends Toni & Dave at Hotel Ocho on nearby Spadina, we strolled the narrow streets of Kensington, taking in quite a few vintage shops. Of special note was the Blue Banana Market, which features around 80+ vendor stalls nestled together in an indoor space with gift items of all kinds. We were amazed at the variety and impressed that all were independent artisans and/or operators. We also loved Bungalow, purveyor of funky clothing, housewares, and furniture, and we bought some essentials at SasMart, a Portuguese discount department store known for its stacks of houseware items.

After saying goodbye to our friends we headed down Dundas Street West to the massive Canadian Tire just off Dundas Square in search of our first ever artificial tree. We selected a Canadian Spruce that my beloved not only assembled it but decorated it all by himself, as we both enjoyed eggnog and some classic Christmas shows.