The good type of plaque 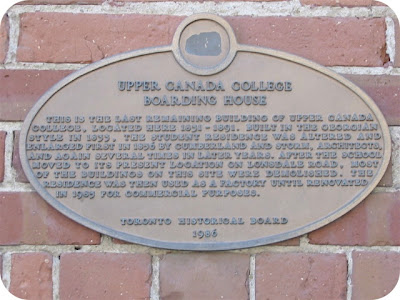 On my way to catch the streetcar home last night I happened to spot this plaque just two streets south of my office building.

I was surprised to learn that from 1829 to 1891, Upper Canada College was located downtown in then-called "Russel Square" (bordered by King, Simcoe, Adelaide, and John streets).

The plaque marks 22 Duncan Street, and reads, "This is the last remaining building of Upper Canada College, located here 1831-1891. Built in the Georgian style in 1833, the student residence was altered and enlarged first in 1856 by Cumberland and Storm, architects, and again several times in later years. After the school moved to its present location on Lonsdale Road, most of the buildings on this site were demolished. The residence was then used as a factory until renovated in 1985 for commercial purposes".

A shame that the rest of the original buildings did not survive.
Posted by Unknown at 2:14 p.m.