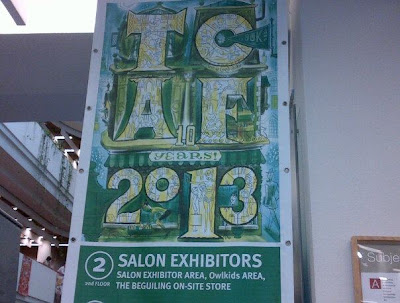 We started our first full weekend in our new apartment by waking up late and then heading out to have a delicious breakfast bagel sandwich at nearby Spot Coffee, opposite Rogers Centre.

With our tummies full, we then headed northward up to Yorkville's Toronto Reference Library in order to walk around the 10th annual Toronto Comic Arts Festival. TCAF is not a comic convention ("ComicCon") but rather a festival for comic artists and graphic novelists to display their wares, meet the public, and make some sales. While there are always tables with established presses, most displays are by independents and you get to see the whole range of publishing and work of all sizes, quality, and genre. Of course, TCAF brings in well-known authors and this year's featured guests included Art Spiegelman (Maus), Jeff Lemire (Essex County), and Seth (Palookaville).

As we headed west along Bloor Street to window shop, we started to smell that distinctive aroma of weed as we approached the Museum subway station. I joked to Mark that there must be some sort of pot parade going on. Little did I know how right I was! When we reached the corner of Bloor and Avenue we were stopped in our tracks by the Toronto chapter of the Global Marijuana March. Never in my life have I seen so much pot being smoked at one time. I thought to myself that this is what it must have looked and smelled like in the muddy fields at Woodstock. The contrast between the well-heeled set strolling along Bloor Street and the mob assembled along Avenue Road was hysterical.  I turned to Mark and remarked, "Well, as least there should be no rioting".

We enjoyed the very peaceful protest for a few minutes and then headed back downtown via subway to Brooks Brothers so I could browse the men's collection in order to pick out a set of shirts for the new season. The Official Preppy Handbook (1980) describes the Brook's Brothers oxford cloth button-down as "the classic shirt" and cheekily winks that "it is widely supposed that no one except Brooks has ever been able to achieve that perfect roll to the collar". I ended up choosing four button-downs, three dress shirts and one sports shirt. Brooks Brothers introduced the button-down shirt to America in 1896, Madras in 1920, and argyle socks in the 1920s.  It's the place where Ralph Lauren got his start in the business.

Delighted with my new shirts, and the always attentive service, I happily wandered out in the direction of home. Along the way we decided to poke into the Leon's inside the historic train roundhouse across from the CN Tower. The building was stunning and it was huge at 40,000 sq/ft. What surprised us, however, was that so much of the furniture seemed to be more applicable to the suburbs and not the 3,000 condo units hovering all over the area. We found much of the offerings bulky and not ideal as what you would find at EQ3 or CB2.