Taking in the Moments 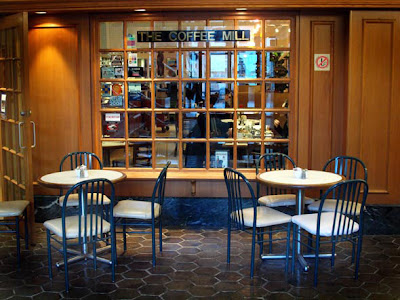 We started today with a fantastic brunch at our new favourite restaurant, Liberty 25. We are convinced that this lovely gem offers Toronto's best Eggs Benedict, plus they offer fresh scones with homemade marmalade and cranberry butter. Mmmm!

Our plan for the the afternoon was to head to Corktown and the Distillery District but the Fates had other plans for us. A streetcar along our line decided to hit a delivery van, so we had to get off and make new plans. We ended up taking the subway north to Yorkville and went wandering.

At one point we thought it would be nice to find a cafe and warm up, as it was getting chillier by the half hour. We ended up going down an alley and we stumbled across the Coffee Mill Restaurant. Little did we know we had found a Toronto institution. The menus had a sticker that proudly announced that 2013 marks the 50th anniversary of this establishment that bills itself as "Toronto's oldest coffee house".

I got up from our table to check out one of the many framed newspaper stories about the business, when a diminutive elder woman came over and asked me if I was interested in such things. When I replied very much, she pointed at the picture of the woman hanging above the newspaper clipping and said "That is me". And so it was that I met owner Martha von Heczey, a Hungarian immigrant who established her cafe in 1963.

She sat at the table next to us and we chatted for about 5 minutes. She was happy to tell us that May 16 will mark the official 50th anniversary and she hoped we would come back to visit. I admired the photos of famous patrons along one wall, noting how many of them are Canadian literary stars. This is not a typical celebrity wall, for this place has been a haunt of writers such as Leonard Cohen, Margaret Atwood, George Jonas, and Carol Shields. I later find out that Andras, the hero of Stephen Vizinczey's 1965 novel In Praise Of Older Women, meets a married woman in the cafe. Also, the cafe was Toronto's first European-style sidewalk cafe. Apparently, in provincial Hogtown al fresco dining or drinking was illegal until the early 1960s, and von Heczey was the first to take advantage of the easing of such ridiculous bylaws.

Being hidden down an alleyway and off a courtyard, the Coffee Mill reminded me of Kingston's venerable Chez Piggy, in that there is something to be treasured in being in the company of an old friend. I don't know if the cafe's schnitzel or goulash is the best in the city or not. In many ways it really doesn't matter. A new malady has hit so many people largely thanks to smart phones: foodieism. There is such a fanaticism about finding the "it" spot for [insert type of] cuisine that I worry that folks are missing the forest for the trees. I absolutely adore Chez Piggy, even though there are certainly restaurants in Kingston that are superior in execution. Part of that adoration has to do with the fact that I have been eating there since 1989. Chez Piggy has what so few restaurants ever manage to foster: a soul. There is a personality, a character, an unmistakable Chez Piggyness that I treasure. I got a very real sense that The Coffee Mill is such a place.

All of this brings me to a memorable Chinese New Year dinner with dear friends Patrick and Raymond, at a Chinatown institution, Sky Dragon.  We treated ourselves to a delicious Peking Duck, among other delicious plates and plates and plates. What a fun experience this place was! Hong Kong-style carts, servers in nice embroidered vests, and a marvellous 1980s decor. We had a blast and ate copious amounts of food for all of $60 a couple.
Posted by Unknown at 11:58 p.m.