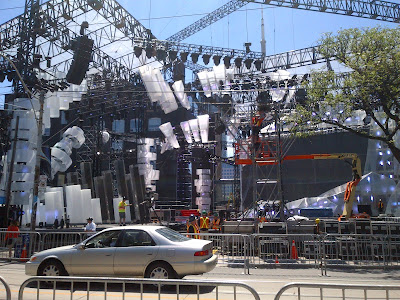 About 200 feet from my office sits the iconic neo-gothic building on Queen Street West that has been home to MuchMusic since it launched in August 1984.

These past few days there has been pure chaos as the parking lot adjacent to the site is being transformed into the stage for the 2012 MuchMusic Video Awards Show.

I took this photo during my lunch break, and while it does not do the setup justice, it captures the fun hullabaloo of the massive preparations for one of pop music's' biggest awards nights.

According to the official guests page, super power couple Justin Bieber and Selena Gomez will be presenting/performing, as well as a host of other youthful acts I have never heard of...Oh well, apparently my ancient demographic is supposed to watch MuchMore.