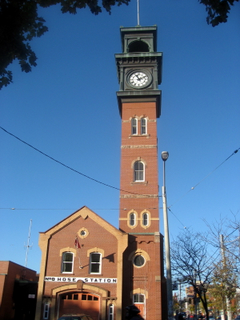 On Saturday we continued our exploration of Toronto's neighbourhoods, taking in three distinctive areas. We started by walking from our condo north up to Little Italy. With the temperature hovering around 25 degrees Celsius, it felt like a warm summer day, and people were out and about taking in the beautiful day. We stumbled across Creme, a new bakery, and indulged in some very tasty gelato. Mark had a scoop each of pistachio and chocolate, while I had a small cup of mango.I was taken aback by the soaring clock tower of the fire hall (pictured at left) that dominates the neighbourhood and made it feel like we were in a small town.

Continuing eastward, we ended up in the adjacent neighbourhood of Kensington Market. The contrast was quite hilarious, as Kensington is-- like all bazaars-- a mess of sounds, bodies, and general chaos. We checked in two of our favourite vintage stores, Bungalow and Exile.

We then hopped on the Dundas St. streetcar and headed west over to Church St, to take in the Church Wellesley Village, ("Church Street") Toronto's largest LGBT neighbourhood. We don't actually visit Church Street all that often and we had fun strolling in and out of the fun stores unique to the area, such as Priape, and Out on the Street. We decided to go to landmark bar Woody's (featured prominently in the American version of "Queer as Folk") for a couple of beers and just enjoyed being able to stroll around hand-in-hand without worry.

On Sunday morning we joined our friend Dana for a wonderful brunch at The Academy of Spherical Arts,  a restaurant and upscale billiards lounge housed in a huge red brick building building that was once home to the largest billiards manufacturer in the British Empire.
Posted by Unknown at 5:16 p.m.