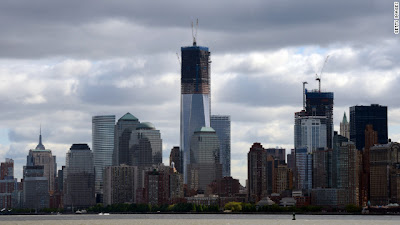 Although still some 500 feet from completion, the addition of steel columns earlier today put the tower at 1,271 feet.

When completed the tower is expected to rise to 104 stories with a symbolic height of 1,776 feet, a commemoration of the 1776 Declaration of Idependence.

It's hard not to be moved by the incredible visual impact and symbolism of the new One World Trade Center. Anyone can understand how important it is for Manhattan to once again scrape the clouds and reclaim a space so tragically undone.

Still, Robert Sardello argues in his book Facing the World that skyscrapers are manifestations of a self-centered ego--designs that turn architecture into "egotecture" and create a wasteland of hollow, inflated, monotonous, lonely, and defiant spaces.

Sardello is certainly on to something in his notion of "egotecture". The World Trade Center twin towers were targeted in 2001 precisely because of their status as the pre-eminent architectural representations of American ego. It is the same phenomenon that drove the UAE to build the behemoth Burj Khalifa, itself a reaction to other recent nationalist ego projects Taipei 101, the Petronas Towers, and Jin Mao Tower.

In fact, the erectors of the Burj Khalifa are so enamoured with their, ahem, erection that they proudly feature a comparison chart on the building's official website. It's hard not to snicker at the underlying message here: "See, mine is bigger than yours".

Ah well...let the Big Apple enjoy its new spiky landmark. They deserve it. Rise up!