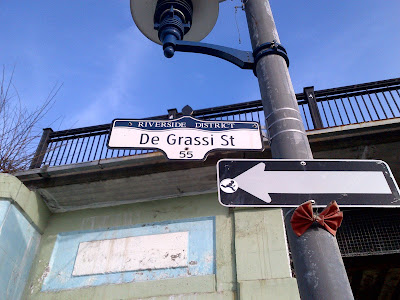 We headed back over to the east side of the city on Sunday morning, with a trip to Riverside, a small neighbourhood within South Riverdale. A gentrified, bohemian strip of quaint boutiques, upscale furniture vendors, and hip cafes, Riverside is home to a great artists walk every summer.

All that nice stuff aside, the real reason I wanted to go to this neighbourhood is that it is home to De Grassi Street, the setting of the excellent CBC shows "The Kids of Degrassi Street" (1979-1986), "Degrassi Junior High" (1987-1989), and "Degrassi High" (1989-1991). As stated on Wikipedia, "[m]uch like its predecessor, Degrassi High dealt with controversial issues ranging from AIDS, abortion, abuse, alcoholism, cheating, sex, death and suicide, dating, depression, bullying, gay rights, homophobia, racism, the environment, drugs, and eating disorders". I have to admit I was rather giddy to finally be able to go to De Grassi Street. It was a sort of pilgrimage in honour of my TV childhood, as curated completely by CBC, thank you very much.

These shows were genuine, moving, and very realistic portrayals of the lives of a group of urban Canadian teenagers. Without a doubt the entire after school teenage show genre owes a great deal of debt to the Degrassi franchise. A fourth show in the series, "Degrassi: The Next Generation", launched in 2001 and is enjoying international acclaim.

The impetus for going over to De Grassi Street was the very sad news released earlier this week that Neil Hope, who had played Derek "Wheels" Wheeler in all four shows, had actually died five years ago alone in a Hamilton rooming house. It was heart breaking to think of a kid I had figuratively grown up with had such an end.

When I was recruiting for Queen's from 2000-2003 I became acquainted with a recruiter from Western by the name of Chris Charlesworth. Not only was he a fantastic and dynamic guy but we later learned from the modest fellow that he played Scoot 'Scooter' Webster on two of the Degrassi series. We were all so very impressed. I recall he seemed rather embarassed about it all. I am not sure if he knew how much it meant to me to meet one of the Degrassi kids. In any case, he has since gotten his MBA and now runs a consulting firm.