When the dead come back 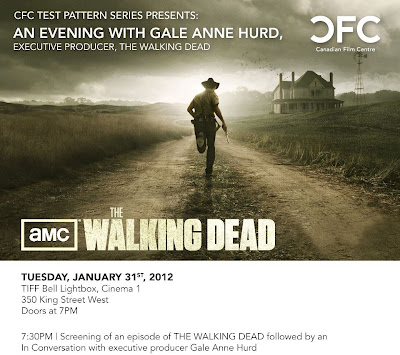 We are so excited, as I have scored free tickets to attend a special screening of "The Walking Dead"--the brilliant AMC TV show based on the awesome graphic novel of the same name-- at the TIFF Bell Lightbox!

We were hooked after the first episode, and so it will be so much fun to take part in the screening and after-show Q&A with the executive producer.

I have actually never enjoyed the zombie genre, but The Walking Dead managed to capture my full attention, thanks to the incredible work of its lead, Andrew Lincoln and one of the best of its supporting players, Laurie Holden. The show is really more about the living, rather than the walking dead, so I have been enthralled with their struggles and challenges as they face the terrifying prospect of a world nearly wiped out and mostly populated by zombies.
Posted by Unknown at 10:37 a.m.