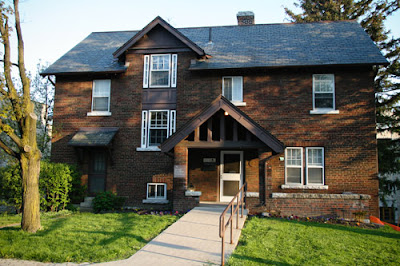 There's a quaint brown brick house on the lower campus of Queen's University that has been quietly and modestly making a difference in the lives of students for almost 40 years.

It's most likely that thousands of Queen's students have walked by the house without knowing the great influence the staff and volunteers have had over the past four decades.

The house is home to the Ban Righ Centre--operated by the Ban Righ Foundation for Continuing University Education--which supports the personal development and academic achievements of women entering Queen's as mature students, or re-entering after a time away, and facilitates their involvement in university life.

The Ban Righ Foundation grew out of the intrepid group of female Queen's alumnae who tirelessly campaigned to establish and build the first residence for women at Queen's in the early 1920s. These enterprising women raised $80,000 over 15 years to cover half of the project cost and the building, named Ban Righ Hall (Scottish Gaelic for "the sovereign woman"), opened in 1925.

I am proud to say that I have recently finalized the process to become a benefactor to the Ban Righ Centre by creating an endowed bursary in my mother's name. The bursary will be awarded on the basis of financial need to mature female students who are either beginning or returning to their university studies. Preference will be given to students combining family, employment, and other responsibilities with their academic studies. The bursary will be awarded for the first time in 2012. I can't wait to meet our first recipient!!

The Centre has a wonderful fundraising initiative called Who Is She? that allows you to honour a woman who has made a difference in your life. You can make a gift to the Ban Righ Centre and then write a tribute to your special woman. For inspiration check out the tributes here.
Posted by Unknown at 3:33 p.m.