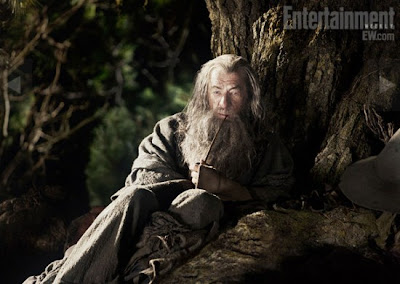 A few pics of production shots from "The Hobbit" have been released to Entertainment Weekly magazine.

I unashamedly confess my heart was so moved to see Ian McKellen back in the distinctive robes of Gandalf the Grey. I have always thought that his performance in the movie adaptation of "The Fellowhip of the Ring", for which he justly received Academy Award and BAFTA nominations, was the heart of the movie.

Indeed, there were few dry eyes when Galdalf fell in Moria at each of the three showings I attended back in 2001 (has it already been 10 years?!). This is because we cared deeply for Gandalf, thanks to a phenomenal performance from McKellen. Perhaps it is his British heritage and training, but one of the things that makes the role stand out is McKellen's incredible vocal subtlety and nuance.

While all were happy to see Gandalf resurrected in "The Two Towers" Gandalf the White is a very different being altogether.  Although greater in power and stature, he is also less grounded and accessible. There is a more endearing humility to Gandalf the Grey. He is far more fearful about his quest, and his obvious affection for the Hobbits and in Men is both a weakness and strength of his character.

Ironically, while McKellen returns to the role 10 years older, he is playing Gandalf the Grey some 60 years before his adventures in "The Fellowship of the Ring". Still, being a Maia--an immortal being--Gandalf would appear to age very slowly in Middle Earth so we should not expect too much of a physical change.

Alas, we must wait until 2013 to enjoy the tale of the dwarves and hobbits who went looking for retribution in the depths of the Lonely Mountain...
Posted by Unknown at 3:33 p.m.