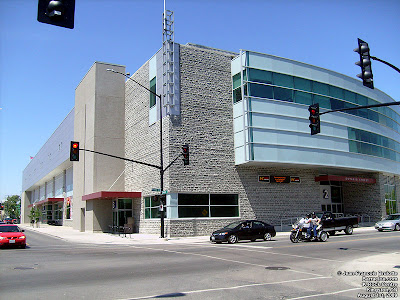 If I look out our back windows I can see the curved roofline of the K-ROCK Centre, Kingston's largest sports and entertainment complex.

Opened in 2008, the 5,700 seat K-ROCK Centre (KRC) was likely the most controversial civic project in the city in at least 50 years. There was very vocal support and equally vocal derision of the compromise location, design, size, cost, etc. of the complex.

The KRC was built so that the main tenant, the Ontario Hockey League franchise Kingston Frontenacs, could finally move out of the embarassing and decrepit Kingston Memorial Centre, which had been built in 1950.  The Memorial Centre certainly had its own charm and ambience but its best years had long passed.

So when the much-maligned KRC opened in February 2008--with a nice inaugural concert by local heroes The Tragically Hip--the city held its breath to see what kind of venue this $46.5M project would become.

To the KRC's great credit it was named "Major Facility of the Year" (under 8,000 seats) in the Canadian Music Industry and Broadcast Awards in 2009 and then again in 2010.  I took a look at the history of acts to come to the KRC and it is an impressive list over the past 3+ years. Here are some highlights of the variety and depths of entertainment we've been able to enjoy:

I think the booking agents have done a solid job of bringing a wide variety of musical/theatre/dance acts to Kingston.  I have not even touched on the athletic and other types of events that have come to town. In particular, Tool and Elton John were major bona fide coups for KRC.

I also know that the KRC is not out of the red just yet, and that the significant bane for the facility is the underperforming Frontenacs. Alas, sports teams are cyclical beasts. Just look at my beloved Queen's Gaels: it was a long 17 years between the 2009 national football championship (Vanier Cup) and their previous win in 1992. Prior to that it took them 14 years to follow up their 1978 championship; that being a quicker 10 years from the 1968 victory.

Now, I am not so well-versed in OHL statistics, but I do know that the province is beset with tough hockey competition and that it takes sustained and consistent coaching and sharp recruiting to make a championship level team. I hope the Frontenacs organization will be able to execute a strategy that gets results on the ice and in the seats.

In the meantime, despite an absolutely terrible website, the KRC is doing an admirable job bringing in talent to entertain, amaze, and inspire.
Posted by Unknown at 1:31 a.m.