Geez, all this time I thought it was about good vs. evil 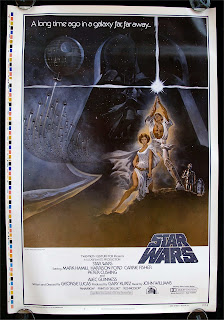 According to Lex Rex, writing on the film site Metaphilm, Star Wars: Episode IV is really about our deep-rooted fear of impotence and premature ejaculation. Huh?

In this quasi-feminist, Freudian analysis, Rex explains the hidden message of the original poster, the truth about Luke, the symbolism of the lightsaber, and the crude reality about the Death Star trench. Rex concludes, "Star Wars is both a macroscopic psychological retelling of the ancient tale with a microscopic biological precis as to its physical achievement".

Not sure if Rex means to be so funny but the paragraph in which is revealed "Star Wars dirtiest little secret"  had me laughing and shaking my head in disbelief.

If you hold Star Wars dear you might want to skip this penetrating analysis.
Posted by Unknown at 5:04 p.m.