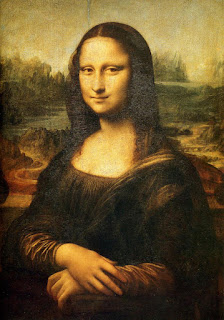 The technique of taking a passage from literature and incorporating it into a work of art is known as ‘invention’ and was used by many Renaissance artists.

“The composition of the Mona Lisa is striking. Why does Leonardo have an attractive woman sitting on a balcony, while in the background there is an entirely different world that is vast and barren?” says Dr. Kilpatrick. “What is the artist trying to say?”

Dr. Kilpatrick believes Leonardo is alluding to Horace’s Ode 1. 22 (Integer vitae) and two sonnets by Petrarch (Canzoniere CXLV, CLIX). Like the Mona Lisa, those three poems celebrate a devotion to a smiling young woman, with vows to love and follow the woman anywhere in the world, from damp mountains to arid deserts. The regions mentioned by Horace and Petrarch are similar to the background of the Mona Lisa.

Both poets were read when Leonardo painted the picture in the early 1500s. Leonardo was familiar with the works of Petrarch and Horace, and the bridge seen in the background of the Mona Lisa has been identified as the same one from Petrarch's hometown of Arezzo.

“The Mona Lisa was made at a time when great literature was well known. It was quoted, referenced and celebrated,” says Dr. Kilpatrick.

Dr. Kilpatrick has been looking at literary references in art for the past 20 years. He has recently found references to the mythical wedding of Greek gods Ariadne and Dionysus in Gustav Klimt’s famous painting The Kiss.