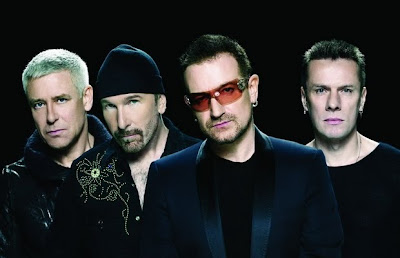 U2 are currently on tour in Europe, Bono having recovered from emergency back surgery, and they have been delighting fans by throwing in new songs here and there. These songs are believed to be the core of a new album rumoured to be titled Songs of Ascent that should arrive in stores before the end of the year (How's that for noncommittal?).

Anyway, thought you might like to hear the eagerly-awaiting new material. Keep in mind that most of these are unfinished and still being tinkered with. U2 are essentially test-driving these songs in front of tens of thousand of people. Thanks to fans who put these up on YouTube!!

"Return of the Stingray Guitar"
The tour's new opening song, a great little instrumental gem of riff and drums.

"Soon"
This was the opening song for the tour in 2009. Used to be called "Kingdom of Your Love". Many expect this will be the opening track on the new album but who knows?

"North Star"
This is a lighter ballad. The kind of song we used to flick on our lighters for. Nowadays it's cell phone and smart phones...Reminds me of "Staring at the Sun".

"Glastonbury"
U2 wrote this song for what was supposed to be their headlining gig at the famed Glastonbury music festival this year. But Bono injured himself and U2 had to cancel. Instead, The Edge showed up and helped Muse deliver a cool cover of Streets.

"Every Breaking Wave"
Of the new songs, I think this is one with the most promise for a certified Stacy favourite.  I have always loved the songs where Bono and The Edge duet.

"Winter"
This is the second version of the song, redone and polished by the band for the sountrack to the movie Brothers. For some reason I actually prefer the much rawer original.
Posted by Unknown at 7:02 p.m.