An old man and his guitar 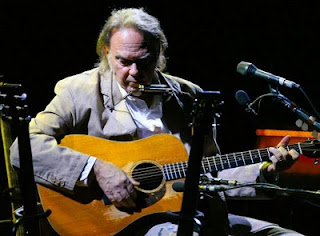 Produced by fellow Canadian Daniel Lanois, this album features 8 acoustic songs that sound like something completely different. Lanois' studio wizardry takes the acoustic guitar to a whole new level, and he came up with a new sound, as he says in an interview, "50 years at the back end of rock and roll".

Young is known as the "Godfather of Grunge" and his signature sound, deftly enhanced by Lanois, comes through loud and clear on these songs. I am very fond of the opening song, "Walk With Me".

Without an accompanying band, Neil is left unprotected and he wails, fights, and implores the listener to care just as much as he does. The lyrics are accessible yet poetic enough to warrant repeat listens. This is a beautifully crafted yet raw album.  I can think of very few other singer-songwriters who could pull off some serious rock magic with just a mic, a guitar, and their voice.