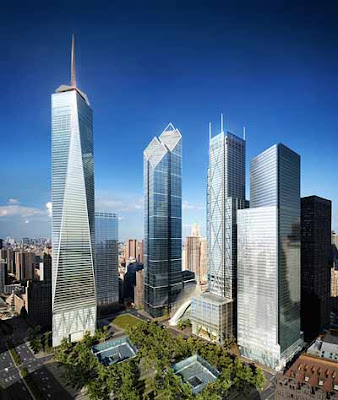 The common device in filmed productions to provide an immediate context for viewers is to open a scene with an establishing shot. The establishing shot would show us the Eiffel Tower, for example, to let us know the action is to happen in Paris; or we'll see a fly-by of the Palace of Westminster to indicate that the events are set in London.

For three decades pretty much any movie or tv show set in New York opened with a shot of the World Trade Center, either from the harbour or from midtown. Once in a while there would be a tracking shot from a helicopter just above the twin towers. These establishing shots were ubiquitous to the point of being cliche. These establishing shot images became part of the post-modern cinemegraphic iconography. Indeed, it would be an interesting challenge for a filmmaker to shoot in New York and not once feature the usual cliche images of the WTC, Empire State Building, Chrysler Building, etc.

Someone once made the comment, upon visiting New York City for the first time, that he felt he had already been there because he had seen the city so many times in movies and on television. I think he also stated that because of America's dominance in filmed entertainment, that the country--and by extension its most prominent cities--exists in your subconscious.

As we approach the 9th anniversary of the destruction of the World Trade Center, I was thinking about how the rebuilt site will become the new establishing shot for New York, not only in movies but also within the symbology of citizens and visitors alike.  It will be mighty strange at first, for arguably the best of American cinema was shot in New York in the 70s and the WTC in so ingrained in our mental databanks. There will be a disconnect as we see images that do not match what we expect to see.

But I am certain that it won't be too long before we accept as normal the startling, sculptural imagery of the new World Trade Center site.  You can take a look at what you can expect to see in movies and television shows for years in the following short movie.
Posted by Unknown at 12:59 p.m.