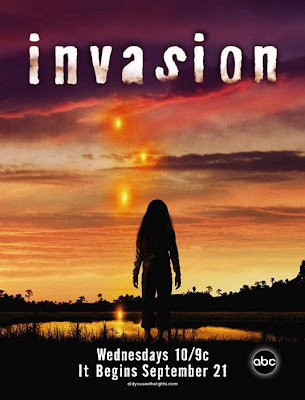 We just finished watching the cancelled 2005 ABC series "Invasion" and it was quite intriguing. I was sad to see it end so abruptly. Set in the Florida Everglades the story follows a blended family as they recover from a hurricane and, later, the apparent invasion of a foreign entity into their lives. Conceived by Shaun Cassidy (half-brother of 70s icon David Cassidy), the show was unjustly canned after being poorly managed by ABC. A similar fate had befallen other sci-fi jewels such as "Firefly" (2002) and "Surface" (2005).

Like Whedon had with "Firefly", Cassidy's ace in his hand was to centre the story on a family. In Whedon's story the family was a crew on a space freighter, while Cassidy took a very contemporary occurrence--a blended family--and stuck them in the midst of chaos here on Earth.

As Cassidy says in an interview on the DVD the reality is that the family are going through the chaos of the conflict inherent within families that have two sets of parents. Both Whedon and Cassidy anchor their fantastic stories around realistic characters. Most importantly, you care about what happens to each member of the family; a deft result of pathos, something so few blockbuster movies ever seem to remember to include (yeah, I am talking to you "2012", "Transformers 2", "Wolfman", "Clash of the Titans", etc).

While cut down this series is worth watching. With 22 episodes the creators have enough room to develop robust story arcs and the show's mythology. It's far less pretentious than "Lost" and equally engaging, although the last episode's riveting cliffhanger ending will break your heart since you know you will never know what happens. Full marks go to the cast, led by the exceptional William Fichtner ("Prison Break").
Posted by Unknown at 2:31 a.m.