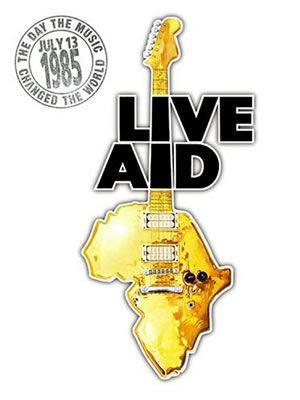 July 13 marks the 25th anniversary of Live Aid, which is hard to believe. It was a great gesture of consciousness- raising and fund-raising about the plight of the starving in Ethiopia. It was an event that completely caught my imagination and stirred my sense of justice. I was all of 13. I remember hanging out to watch the broadcast, which was a massive technical feat at the time. The concert was live in London (UK) and Philadelphia (USA) and telecast around the world.

There were many memorable acts, some of whom I had heard of thanks to my mom's impressive record collection; notably Queen, David Bowie, The Police, and many others. But for me, Live Aid will always be about U2's 12-minute version of "Bad", a song that just seemed to say it all and Bono's famous leap off the stage to save a girl in the audience from getting crushed.  Ignore the godawful mullet and enjoy a superstar band emerging before your eyes in one of live rock's greatest performances (plus a hilarious VCR recording blip).

You can also enjoy a quick clip of Bono on July 9 reminiscing on the event here.
Posted by Unknown at 1:08 a.m.