Celebrating Canada in the first capital 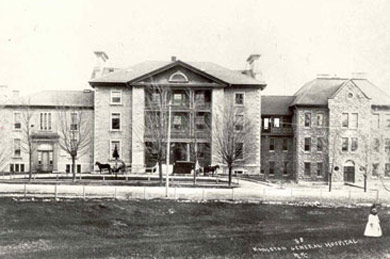 Kingston likes to boast that it was the first capital city of Canada when the Act of Union (1840) brought Upper Canada and Lower Canada together into a new colony called the Province of Canada. The governor, Lord Sydenham, helped Kingston's fortunes greatly by deciding in 1841 that the Legislative Assembly ought to be based in Kingston, then not only Upper Canada's most populous town but also its most prominent military and economic centre. In that same year a group of local Scottish Presbyterians would successfully petition London for a royal charter to establish Queen's College. But that's another story...

As it turns out when the Legislative Assembly met for the very first time, in June 1841, they actually met in the original section of Kingston General Hospital (pictured above) that had been erected in 1835 but left vacant due to insufficient funds. Kingston would be the capital city for a short time--its "reign" lasted from 1841 to 1844--and KGH was in all senses our first parliament building during that time.

Alas, for reasons of proximity to the United States and other infighting, the capital was moved around to Montreal, Quebec City, Toronto, and finally settled on the mosquito-infested, isolated, lumber town that was later called Ottawa. Kingston's glory days were over, but the rush of building and expansion left Kingston with one of Canada's greatest concentration of 19th century stone buildings and a nice sense of civic history and pride. Kingston, after all, was home to our first Prime Minister, Sir John A. MacDonald. As for KGH, it managed to begin fully operations as a hospital in 1845 and it benefited from its association with the Queen's Faculty of Medicine that had begun in 1854.

For its part in our nation's history Kingston celebrates "First Capital Day" every June and on each Canada Day it also swells with pride for its special part in the creation of Canada.
Posted by Unknown at 7:18 p.m.