The art of misdirection 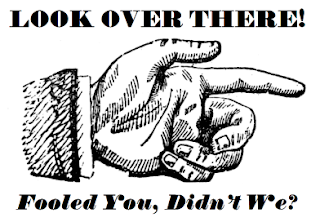 There's a great program on CBC Radio 1 called The Age of Persuasion that details the ongoing history of the art, science, and impact of advertising. If you haven't caught it yet it's probably the most informative 30 minutes you can ever spend. You will listen incredulously as you come to see how you are being shamelessly manipulated on a daily basis.

One of the most recent hard-to-swallow ads was part of GM's "Reinvention" campaign, which spawned a cynical but hilarious parody. The latter was probably far more accurate and the spoof captured the public's attitude around the staggering bailout.

Canadians have recently been subject to Maple Leaf Foods attempt to re-brand itself as "Your Local Butcher" after the devastating listeria outbreak that severely damaged the company's public image and confidence. In fairness, the original apology ads were appropriately solemn and heartfelt but the new ads trying to convince viewers that your packaged meat is prepared by a small town butcher is a real stretch. In truth, the giant processing plants are anything but down-home.

Some my not find this a problem but I always cringe at how WalMart trumpets itself as a great American company with a great social conscience that is great for the real American family yet over 70% of its products are made in China. Furthermore, "Wal-Mart's per store charitable contributions do not match up to the amount of money a store takes in the "numerous forms of public assistance--Medicaid, Food Stamps, public housing--that often allow workers to subsist on Wal-Mart's low wages. A report by the House Education and Workforce Committee conservatively places [public assistance costs] at $420,750 per store; the Wal-Mart Foundation's per-store charitable giving is just 11 percent of that amount ($47,222). [source]"

There are so many more examples but for a hint at the insidious nature of marketers and how they work on your desires watch this illuminating TED talk by Terry O'Reilly.
Posted by Unknown at 8:04 p.m.