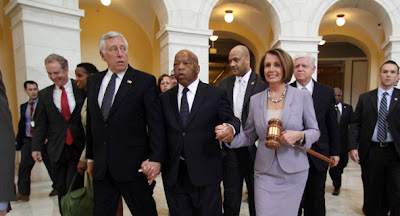 In the last minutes of Sunday the US House of Representatives narrowly passed a landmark bill that will provide medical insurance to some 32 million Americans.

The 219-to-212 vote in favour of the legislation follows the Senate's approval of the bill in December 2009.

A simultaneous package of amendments to the bill is currently on the boards and will head back to the Senate.

The legislative victory will most likely bolster Barack Obama's approval ratings and help overcome the cries of disappointment his faithful have been mourning. The challenge to reform health care has been a ferocious moral and political battle. Credit will deservedly go to Speaker of the House Nancy Pelosi (pictured holding the gavel) for her steadfast corralling of Democrats.

Pelosi is now certainly the most powerful Democrat in the land after Mr. Obama himself. Together they have accomplished a remarkable feat.
Posted by Unknown at 1:48 a.m.