Songs in U2 minor 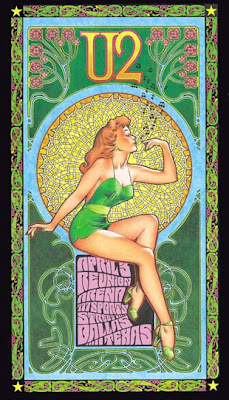 While many people know much of the U2 canon due to the popularity of the band's music, there are a handful of very special songs that you've heard by other artists that were actually written by U2 and/or Bono. Some of these are veritable gems and some of my favourite songs beautifully interpreted by other artists. Here is a sample:

She's a Mystery to Me (1989)
Bono wrote this gorgeous song for the inimitable Roy Orbison, who provides such a stunning vocal as only he could. This song would feature on Orbison's last album, released after his death. A lovely story about the song here.

Two Shots of Happy, One Shot of Sad
Bono wrote this melancholy song with Frank Sinatra in mind but the song was popularized by Canadian jazz singer Matt Dusk. I am not a fan of Dusk's version, much preferring that of Nancy Sinatra. Check it out here (featuring Adam Clayton on bass and Larry Mullen Jr on drums).

When Love Comes to Town (1988)
Bono wrote this song for BB King and it debuted on their 1988 double album "Rattle and Hum". King has since adopted it into his own recordings and live performances.

You Made Me the Thief of Your Heart (1993)
This song was written by Bono, Gavin Friday, and Maurice Seezer for the soundtrack to the movie "In the Name of the Father", and features Sinead O'Connor on the main vocal. She often plays the song in her concerts.

Miserere (1992)
Bono and Zucchero co-wrote this lovely song and it has been covered so many times, but I have always preferred it sung by the great Pavarotti. In this version, at Royal Albert Hall, Zucchero is on piano and the Big Voice is standing nearby. This breaks my heart every time.

North and South of the River (1995)
Bono and The Edge wrote this song with Christy Moore, who provides a solid vocal interpretation of the struggle for a couple who live on opposites sides of the River Liffey.

Goldeneye (1995)
Written by Bono and The Edge for the soundtrack to the 007 flick of the same name. Delivered by the one and only Tina Turner. This marked Pierce Brosnan's debut as Bond.

The Wanderer (1993)
Written by U2 and sung by the Man in Black himself, and featured on U2's album "Zooropa". As if anyone else could have sung this song. RIP Johnny Cash.

Slow Dancing (1993)
Bono woke up one day, he recounts, with a Willie Nelson song in his head called "Slow Dancing". Turns out it wasn't in Nelson's catalogue, so Bono goes out and makes sure it becomes one. Beautiful and quiet little gem.

Heroine (1986)
Despite her tough anti-U2 stance for a while Sinead O'Connor's first recording was actually this single written by The Edge for the soundtrack to the movie "Captive". Features Larry Mullen Jr on drums. By the way, Sinead would record yet another song with U2 in 1997 called "I'm Not Your Baby".

Sweet Fire of Love (1987)
All four members of U2 recorded this great tune with Robbie Robertson during "The Joshua Tree" sessions. It appeared on Robertson's album "Fallen Angel". The last minute is sweet vintage The Edge.