Not going gently into that good night 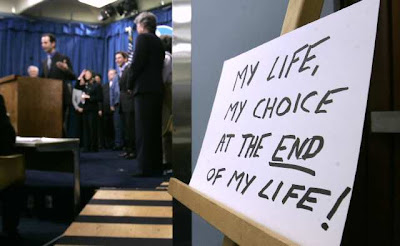 The suicide of brilliant fashion designer Alexander McQueen last week predictably sent ripples through the fashion and entertainment industries. Folks were right to mourn his death, as with any loss of human life. Of course, the fact that he killed himself mars his memory and reputation.

Suicide is a mighty difficult topic to talk about especially in Canada and the United States, where we live in a death-defying culture. It might in fact be trait of most of the northern hemisphere's countries. I am convinced that our reactions to suicide are closely linked to how we generally approach death overall. Of course, one's religious tradition also has a mighty powerful impact. If you believe suicide is a mortal sin then your reaction to a suicide will be loaded with harsh judgment.

I have lost an uncle, two cousins, and two friends to suicide. Of the five, four were men. The cause of death varied, from gunshot, to carbon monoxide, to overdose, and also to hanging. Experts say that how a person chooses to end their life can tell you a great deal about their state of mind. Experts have also written about how those left behind go through a vicious cycle of shock, anger, sadness, and grief. For some the cycle last months and for others it takes years.

Surely only proselytizers can view all suicides as the same act. There are so many contexts to suicide and they ought to be considered if only to be understood, let alone forgiven. It's hard to reconcile how a 9 year-old can take his life but we seem to understand when a dying 90 year-old wants to end hers. Of course, in our culture children have no agency so we cannot fathom how a "minor" can make any decisions for themselves.

Call me heretical but I am convinced that in some cases suicide is a rational response to a most irrational world. Do not confuse that previous sentence with me advocating suicide. Trying to understand something is not akin to supporting it. Consider the people who jumped out of the World Trade Center towers on 9/11. Can any of us really negatively judge them for choosing their death on their own term? Can any of us imagine the horror in having to make that decision, to stay and die or to jump and die?

If we can understand why people would jump 70 stories to their certain death why are we any less compassionate if a man walks into his bedroom and hangs himself? If we understand that on 9/11 the people in the towers felt that they had no other choice but to jump as a last act of dignity and freedom why can't we also understand that the man who hangs himself similarly feels that he is trapped without any other choice of action but to take his own life?

We are not asked to be brought into this world and there are many whose lives are utterly miserable. We seem far more understanding when one has a terminal illness but in reality there are just as many people who suffer from terminal angst. I think of one of my passed cousins and it was clear that his quality of life was no less terrible than a dying man's. As hard as his death was it became obvious that he was never at peace while alive. Taking one's life, as tragic as it is, may be the highest act of free will a human has.

At least he is not suffering any more.
Posted by Unknown at 1:33 p.m.