In praise of guitar heroes 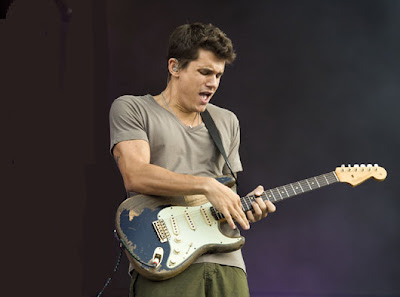 Okay, so like thousands of youngsters I spent copious amounts of time doing some air guitar moves in my bedroom, as I listed to my tapes on my boom box from Sears. Aw, sweet memories of tape-to-tape dubbing and auto-playback.

While I never did go on to become a real guitar hero (sniff, sniff) I thought I would share some of my favourite guitar moments...Note these are favourites; I am not claiming these are all-time best or greatest guitar songs, just those that have always been part of my life's soundtrack. The year in parentheses refers to original release year.

Take it Back (1994) --Pink Floyd
Guitar god David Gilmour takes us into to stratosphere with this grand tune and his unmistakable effects heroics.

Big Love (1987) --Lyndsey Buckingham
The guitar hero of Fleetwood Mac, Buckingham takes the 1980s pop-synth hit and turns it into a lesson in how to play the guitar. Watch a master at work with a less-is-more brilliance.

The Fly (1992) -- U2
Not only is this the best version ever of this game-changing song but it also has what is likely The Edge's greatest solo. This was the sound of U2 chopping down the Joshua Tree.

All Along the Watchtower (1968) -- Jimi Hendrix
Jimi Hendrix took a mopey Bob Dylan tune and reinterpreted it into this guitar masterpiece. This will remain as one of rock's greatest guitar songs.

Edie (Ciao Baby) (1989) -- The Cult
The song that will forever define my first year of university, and my own sense of emancipation. I know most folks prefer "She Sells Sanctuary" which is a great song in its own right, but "Edie" has a special place in my heart.

Welcome to the Boomtown (1986) -- David and David
This duo released one album, "Boomtown" and then promptly broke up and went their separate ways. A shame, for it remains one of my favourite records of the 1980s and this song was played to death in my house. Incidentally, David and David came together to help Sheryl Crow create her stunning debut album in 1993.

Jackie (1987) -- Sinead O'Connor
I do not know much about guitarist Marco Pirroni but his work on this song from Sinead's astonishing debut album has always left me breathless. When matched with that vocal ability there is only magic.

The Maker (1989 ) -- Daniel Lanois
The genius Lanois is responsible for some of the most respected albums of the last 20 years in his role as producer and inspired session player. In between his producing duties he has produced a few albums of his own, including this gem.