Haitian crisis brings out the songs 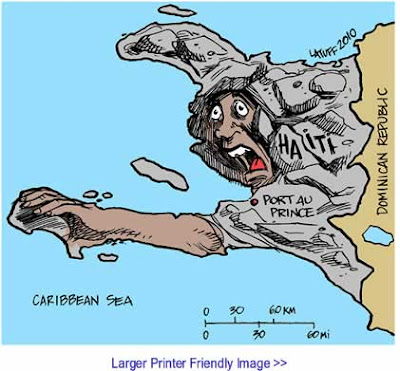 In the wake of the unbearable tragedy that Haiti has been bearing these past few weeks well-minded celebrities have been gathering to record themselves singing about it. Well, sort of...

The most high-profile recordings are actually do-overs, with uber producer Simon Cowell herding one group to re-record REM's "Everybody Hurts", and Lionel Ritchie and Quincy Jones corralling 100 celebrities to remake "We are the World".

During the recent "Hope for Haiti Now" all the songs performed were existing songs performed by the original artist or covered by others, with one sole exception, the the hastily authored single "Not Gonna Leave You Stranded" by Bono, Jay-Z, and Rhianna. If you are sufficiently moved and/or guilty you can purchase the song(s) here.
Posted by Unknown at 12:53 p.m.