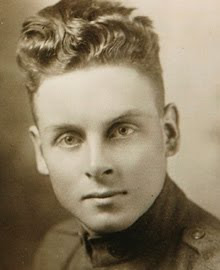 The passing of Mr. Babcock marks the end of an era. His family mourns the passing of a great man. Canada mourns the passing of the generation that asserted our independence on the world stage and established our international reputation as an unwavering champion of freedom, democracy, human rights and the rule of law. - Prime Minister Stephen Harper

Canada was called to arms in August 1914 and the country quickly amassed a army of tens of thousands within months to serve alongside Great Britain. In the end, Canada lost 67,000 soldiers with another 173,000 wounded. It was an enormous sacrifice for the young and small country which fought for the first time as a distinct unit under a Canadian-born commander.

Mr. Babcock is the last known member of this great generation that helped forge a new era and contributed to the beginning of vigorous nation-building. May he rest in peace.
Posted by Unknown at 10:05 p.m.