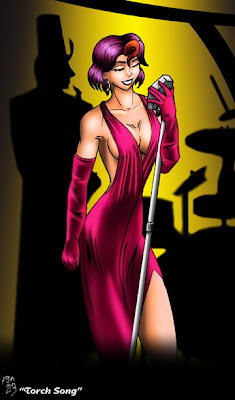 As Mark and I closed off 2009 in New York City we really connected with the gay core of the City. We spent time in the heart of historic gay New York, the wonderful Greenwich Village (site of gay liberation in the 1970s and the primary gay area of the 1980s), and then in Chelsea (the new boystown of the 1990s), and finally in Hells Kitchen (the up-to-the-minute gayborhood).

In each neighborhood we hit the best piano bars, the locus of gay sentimentality, humour, and wit. It's hard to imagine New York or even the U.S. without the pathos of the Great American Songbook (thanks Cole Porter!) and the dreams of Broadway (thanks Leonard Bernstein!). I am not sure why exactly that gay men were so drawn to write and celebrate torch songs but it was evident that song remains very important for gay men to share, cry, and celebrate.

The most moving experience was at Marie's Crisis in the Village, where off-Broadway stars and regulars alike mingle and sing the best of show tunes and standards. We were treated to some exceptional chanteuses and we all felt like members of the chorus of a Broadway show.

So, in tribute to the great songs that have served as the clarion call for gay men across the ages, here is a list of my all-time favourite torch songs:

"Send in the Clowns"
Stephen Sondheim's classic from his musical "A Little Night Music" (1973). I have provided my favourite version, sung by the inimitable Sarah Vaughan.

"Somewhere"
Stephen Sondheim (lyrics) and Leonard Bernstein (music) created this Broadway classic for "West Side Story"(1957). In my mind this was never better sung by anyone other than Ms. Barbra Streisand.

"I am what I am"
Written by Jerry Herman for the Broadway musical version of "La Cage aux Folles" (1983) this song is the finale of act 1. While written originally for a man to sing (as the character is a gay man who dresses in drag) this version by Welsh singer Shirley Bassey always makes me cry.

" The Man I Love"
The Gershwin brothers gave us this gem in 1927, and I am very fond of this interpretation by the great Ella Fitzgerald.

"Happy Days are Here Again"
Written in 1929 this Tin Pan Alley standard was redefined by Barbra Streisand in this outstanding 1965 performance.

"The Man that Got Away"
Ira Gershwin wrote the lyrics for this song for the movie "A Star is Born" in 1954. In my mind there is only one version of this song, delivered exceptionally by the star herself, Judy Garland.

"Cabaret"
While originally a Broadway play most folks are more familiar with the 1972 film starring Liza Minelli, from which this performance originates. This was hugely popular in the piano bars and the whole place would join in.

"Summertime"
From the musical 1935 "Porgy and Bess" and written by Ira Gershwin. Given its age, hundreds of singers have interpreted this classic, from Billie Holliday to Ella Fitzgerald and up to Leona Lewis. For my money, the best version is from 1969 by none other than Janis Joplin.

"Ev'ry Time We Say Goodbye"
Cole Porter's 1944 standard is especially heart-breaking when sung by the melancholic and incomparable Nina Simone.
Posted by Unknown at 4:19 p.m.