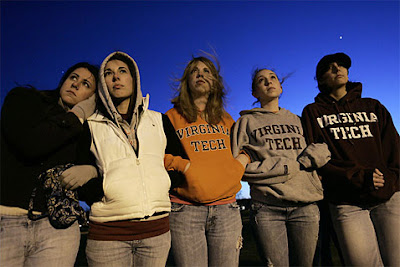 Police announced Tuesday that they have tentatively identified the remains of a woman found in a farmer's field near Charlottesville, Virginia as those of Morgan Harrington, 20, an education major at Virginia Tech, who had been reported missing after a Metallica concert.

Yes, that Virginia Tech. Once solely fabled for its engineering programs and its spirited Hokies varsity program Virginia Tech has been greatly overshadowed by tragedy and grief in recent years and has taken on a more notorious reputation.

Most infamously the school of 30,000 students was deeply shocked and traumatized in April 2007 when 23-year old student Seung-Hui Cho went on a shooting rampage, killing 32 people and then himself. It remains the deadliest such mass-killing in U.S. history, a terrible badge for a university to have to bear.

Surely the good people of Virginia Tech were still recovering and mourning when yet another horrific act of brutality occurred in January 2009, when international graduate student Xin Yang was decapitated in a cafe on campus by another international graduate student named Haiyang Zhu. This incident was barely reported in the media, perhaps for reasons of sensitivity, although the fact that the victim and perpetrator were both Chinese nationals makes one wonder*.

As if this wasn't bad enough two Virgina Tech students, David Lee Metzler and Heidi Lynn Childs, were shot to death in August 2009. They were 19 and 18 respectively; barely adults starting their lives and adventures together. How a campus is supposed to be able to handle four major tragedies in such a short amount of time is beyond me.

I have been a member of a university community for 20 years, nearly half of which as a staff member. University and college campuses are marvellous places to work and live. Most have a well-defined sense of community and the best of them feel like a large family. There is a sense of stability and permanence as well as a buzzing and catching energy of promise and beginnings, thanks to the presence of thousands of young adults. At a place such as Virgina Tech (est. 1872) or my alma mater and workplace, Queen's (est. 1841) there is a strong sense of being rooted and connected to a past through traditions in academics and sports.

Our students come to our campuses with dreams and hopes and we pledge to keep them safe and nurture them to the best of our ability. Our hearts break to imagine having one of our bright sparks go to darkness in a farmer's field.


*The September 2009 on-campus murder of Annie Le, a Vietnamese-American, did indeed garner broad media coverage but most likely because she was a graduate student at Yale.
Posted by Unknown at 12:28 a.m.