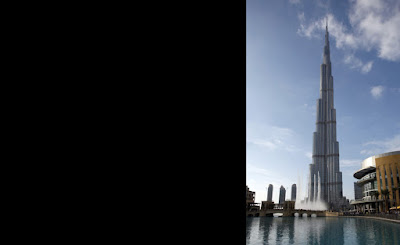 And they said, Go to, let us build us a city and a tower, whose top may reach unto heaven; and let us make us a name, lest we be scattered abroad upon the face of the whole earth. Genesis 11:1-9

Today the Emirate of Dubai gave the most lavish opening ceremony with the greatest fireworks show ever created to formally announce the (ahem) erection of the world's tallest phallic symbol, the Burj Dubai.


Forget Texas. Only Dubai really does it big. There is no one in the tiny emirate that is not obsessed with superlatives. On a day when Dubai gets global media attention for its astounding engineering marvel, it seems we were asked to completely forget the financial troubles of the emirate as well as the questionable labour practices that enabled the tower to be built. Instead, we are to marvel at the world's highest observation deck, inhabited floor, pool, and mosque.

Dubai has made bestest, mostest, greatest, biggest, grandest its complete modis operandi, what with the Palm Jumeirah island, the Burj Al Arab hotel, the Dubai Mall, etc. One wonders what else Dubai can possibly build to impress its seemingly endless need for approval and self-congratulation.

It was also announced today that the tower would be renamed the Burj Khalifa after the president of the UAE, although it probably should have been more accurately renamed the Burj Hubris.
Posted by Unknown at 12:39 a.m.