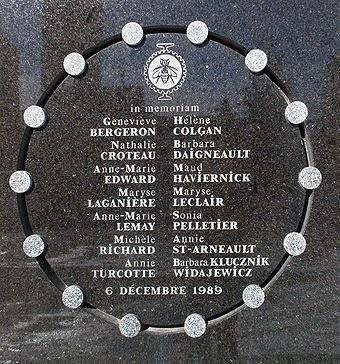 I was in my first year of university on December 6, 1989. I had returned home for the holidays after my first term of studies and was watching the news with my mom, when the horrific story broke of the massacre at Montreal's Ecole Polytechnique.

The events struck close to heart as the targeted victims were female university students, not unlike my new friends back at Queen's. As it turns out my core friends who sustain me and who are my most intimate and trusted circle are all women I met at Queen's.

So when December 6 comes around each year it is these incredible and special women that I think of and cherish just a little bit more than usual. I can't imagine losing any of them in such a brutal and horrific manner.

I wonder about the people left behind on December 6, 1989. I wonder about how they were robbed of these precious 14 women. I wonder about what the future could have had in store for these young women, instead of being wiped out on a fateful day near the end of term on a cold December evening.

20 years later and we ought to cry in remembrance but also promise ourselves that we will do everything we can in our own lives to stop violence against women.
Posted by Unknown at 3:30 p.m.