If U2 build it, they will come 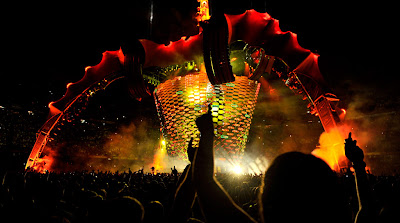 U2 has announced that they will build an open-air stadium in Montreal capable of welcoming over 60,000 fans.
More than 300 employees will be employed in the construction of this facility, on the site of the former Hippodrome, which is slated to begin in May. Two months will be necessary to complete the site build and another month will be required to dismantle it. More than 300 trucks will transport the 40,000 grandstands coming from .

With a cylindrical video system of interlocking LED panels, and a steel structure rising 150 feet from the floor over a massive stage with rotating bridges, the band has truly created an intimate 360º experience for concert goers. Keeping with the concept that this tour is more about a unique staging configuration, ticket prices (, , and ) are set so that more than half of fans will pay or less for their tickets to this tremendous concert event. U2 hits Montreal in July 2010.
Posted by Unknown at 10:31 a.m.