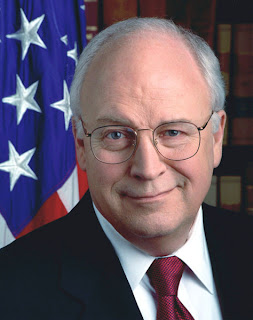 Dick Cheney is on an aggressive save-my-legacy tour speaking all over the place to, ahem, set the record straight on the Bush II presidency and affiliated policies.

In a recent interview with Fox News' Greta van Susteren, he admitted that there was never any evidence that was involved in the September 11th attacks. "On the question of whether or not was involved in 9-11, there was never any evidence to prove that," he told the "On The Record" host in a joint interview with his daughter Liz. "There was "some reporting early on ... but that was never borne out". This in stark contrast to the piles of rhetoric he delivered during the build-up to the invasion of Iraq.

Many are crying foul and pointing to Cheney's knack for revisionist history, as he defects blame for 9/11 to Richard Clarke and the CIA, for example, and as he struggles to redefine his image and reputation. Word is that a memoir is forthcoming. It may be the most incredulous read of the year, even better than a Dan Brown tome. More to come...