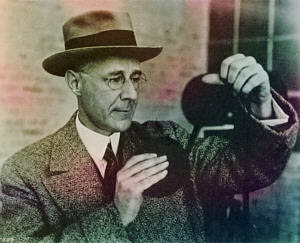 It turns out that Queen's is connected to Herbert T. Kalmus, one of the most important contributors to the development of motion pictures. Who knew the principal founder of Technicolor was at Queen's? Like only a handful of technological innovators, Kalmus deftly blended a shrewd but charming business sense—which was instrumental in attracting investors and Hollywood studios—with a probing and imaginative scientific mind. Were it not for Kalmus's persistence and vision, not to mention his business acumen, the industry-wide adoption of three-color processes for shooting films in full color would have occurred indefinitely later. The man who became synonymous with Technicolor thus changed the course of film history.

Like synchronized sound, color required an industrial overhaul of every phase of movie making, but what tested the resolve of Dr. Kalmus and his company was the need to enhance and improve the process until Hollywood would start making the switch to color movies—a period lasting some three decades.

Orphaned at a young age, Kalmus worked his way into and through Massachusetts Institute of Technology (then called Boston Tech). There he met the school's only other physics major at the time, Daniel F. Comstock, who would become his business partner. After graduating from M.I.T. and then, in 1906, receiving their doctorates in Europe, the pair of young physicists returned to the United States. Between 1910 and 1915 Kalmus worked at Queen's as a physics professor, where he performed his first research on the Technicolor process. In 1912, when they teamed up with W. Burton Wescott, an "engineering genius" in Kalmus's estimation, the trio started a patent company called Kalmus, Comstock, and Wescott (KCW). The young firm made several profitable inventions, but it was not long before Technicolor was its exclusive focus.

As early as 1915 KCW took out patents (mainly on special equipment for color cinematography and projection) for the first Technicolor process. Within two years they were shooting their first color film,The Gulf Between (1917), with a special Technicolor camera that used a beam splitter to simultaneously expose two different strips of film, one sensitive to the green spectrum and the other to the red spectrum. However, the procedure was imperfect and costly, and it was not until the fourth Technicolor process, patented in 1935, that they were successful. The first of Technicolor's three-strip processes, it was used with enormous success in films such as The Wizard of Oz (1939) and Gone with the Wind(1939). Later, after inventing a mono-pack color process, which could be shot with a standard one-strip, black-and-white motion picture camera, Technicolor briefly cornered the market and initiated the industry's full conversion to color.