Clash of the Coalitions 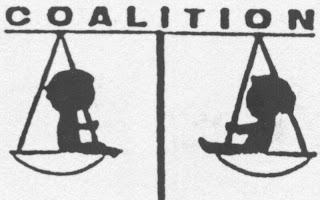 Here's what I awoke to on CBC news this morning:
Country 1

The country's top court has dissolved the government. The decision, which effectively dissolves the Prime Minister's government, follows months of opposition protests that have driven government officials from their offices. The Consitutional Court also banned at least one of the ruling coalition partners, effectively dismantling the government over allegations of vote-rigging. Adeputy prime minister from one of the remaining coalition parties will take over until the parliament could approve a new government.

The head of state is cutting short a state visit to Europe and returning to the country in the face of a political crisis that could bring down the government next week. The head of state will be called upon to decide who should govern if the minority government falls in a confidence vote. Opposition leader announced Monday that he had informed the head of state of a formal entente between the opposition parties, and called on her to let him govern. The Prime Minister's minority government could fall Monday when the House of Commons votes on last week's economic update - unless the Prime Minister prorogues Parliament.

Fascinating times indeed. I don't know whether to laugh or cry. By the way, the first country is Thailand and the second country is Canada.