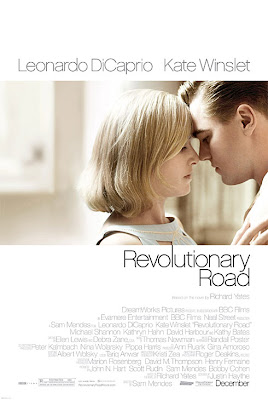 Finally, the reunion I've been waiting 11 years to see...My two favourite actors are appearing in Revolutionary Road this December. Based on the 1961 novel of the same name by Richard Yates (and the inspiration for the TV show "Mad Men") this film, directed by Sam Mendes, promises to be memorable and poignant. I think it will prove to be an excellent counterpart to Mendes' "American Beauty" (1999). In a 2000 re-review of the novel, the New York Times reviewer writes, "Mostly 'Revolutionary Road' is just so smart and keen and shockingly inventive about everything it turns its imagination to: about being young and blissfully rudderless in New York City before the responsibilities of marriage and family cloud the sky; about entertaining the awful neighbors; about long, long business lunches; about being 30 and feeling middle-aged; about fearing change when you know change is likely to save you; even about the pink light seen through a poor man's earlobe, palely summing up all of humanity's frailty and failure."