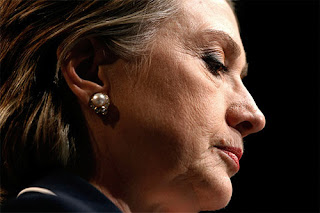 As I watch Governor Sarah Palin address the Republican National Convention I can't help but think of Senator Hilary Clinton. Surely she is also watching, and she must be pinching herself. She must be finding the scene on the television incredulous. I wonder if she is harbouring a bitterness as she contemplates the past year and the decades of her public service and where it has led her--to watching instead of being in front of the camera setting the agenda.

Tonight's messages from Rudy Giuliani and Governor Palin have been barbed and vicious. Both have come out on full attack mode with their gloves off. For example: "This is a man who can give an entire speech about the wars America is fighting, and never use the word "victory" except when he's talking about his own campaign". Ouch! They are slicing and dicing Senator Obama for his lack of executive experience and they are positioning him as being all about style and little substance. The word "experience" has been used in almost every sentence, and while Palin is veering on too much sarcasm for my taste, Democrats are very wrong to discount her or the Republicans. Still, I wish she would actually tell us why she would make a great VP instead of spending her time deifying McCain and denigrating Obama. Read Palin's speech here.

As of last look there was only a one-point gap between the parties. This tells me that the so-called "battleground states" and the undecided will determine this election. We should expect one of the most barbaric displays of party rhetoric, stinging criticisms, tabloid-style attacks, excess negativity than in the last two elections. The "Us" and "Them" quotient will rise exponentially. The key will be to see which party can mobilize feet to the polls, and who can win over the fence-sitters. Palin's straight-shootin', small-town hockey mom persona fuels the Republican base, and perhaps will pull in many others. Obama will need Hilary Clinton more than ever to work the stumps and pull in support for the Democrats.